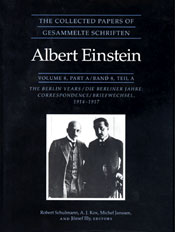 In 1919, two British solar eclipse expeditions confirmed the correctness of general relativity theory and propelled Einstein into instant celebrity. Before this major turning point, the majority of Einstein's writings published in this volume dealt with the clarification of general relativistic problems and questions of cosmology. After his rise to international fame, his publications changed markedly. He faced an increasing demand for popular articles and lectures on relativity, its development, and its meaning, and he responded to a host of commentators, ranging from skeptical physicists to philosophers and outspoken anti-relativists, some of them fueled by anti-Semitism.

Einstein used his newly won fame to lend prestige to political causes, especially to the reconciliation among European nations and to Zionism. In the early years of Weimar Germany, Einstein spoke out vigorously for the young republic, emphasizing the rights of the individual. He was deeply concerned with the misery of the Central Europeans in the grip of starvation and economic collapse, praised the support of individuals and groups such as the Quakers, and championed the cause of Eastern European Jews and the establishment of a university in Palestine, which he envisioned as a cultural center for all Jews.