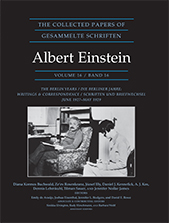 During the period covered by this volume, Einstein aims to discover whether one can derive the electron’s equations of motion directly from the field equations of general relativity, and he embarks on a new approach to unified field theory founded on teleparallel geometry. On these topics, he engages in exchanges with J. Grommer, C. Lanczos, and particularly with C. H. Müntz, and corresponds with mathematicians like R. Weitzenböck and É. Cartan.

Einstein attends what will be considered a historic 1927 Solvay Conference where the new quantum mechanics is discussed, but in fact he makes very few remarks.

In an important prelude to his eventual emigration to the United States, he is invited in September 1927 to accept a research professorship at Princeton University.

Despite the sudden onset of a severe heart ailment in 1928, followed by an almost year-long period of convalescence, Einstein maintains a sustained engagement with scientific work, correspondence, and social and political issues. He publishes many articles and interviews designed for a popular audience and continues various technical preoccupations, including publishing a patent for a novel “people’s” refrigerator and being intimately involved in the design of his famous sailboat.

Einstein advocates for domestic legislative reform, gay and minority rights, European rapprochement, and conscientious objection to military service. He resigns from his positions at the Hebrew University. He also tries to avoid the fanfare marking his fiftieth birthday in March 1929 yet is “buried under a paper avalanche” from the tributes.

His hiring of Helen Dukas as his assistant, who accompanies Einstein to the end of his life, is of great significance for the ultimate preservation of his written legacy.