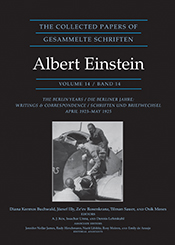 In the almost one hundred writings and more than one thousand letters included in this volume, Einstein is revealed yet again as the consummate puzzler of myriad scientific problems as well as the invested participant in social and political engagements.

In the fall of 1923, Einstein endures a “cheerful banishment” in Leyden for over six weeks after suddenly fleeing Berlin due to anti-Semitic violence, rumored threats to his life, and the danger of an imminent government overthrow. Einstein’s financial situation improves during this period, partly due to the receipt of Nobel Prize money, most of which is used by his Zurich family to purchase a house. He has a fourteen-month romantic relationship with his secretary, Betty Neumann. He rejoins the International Committee on Intellectual Cooperation and promotes the idea of a European union, while his support for the establishment of the Hebrew University in Jerusalem finally bears fruit with its inauguration in April 1925. As a “traveler in relativity,” Einstein embarks on a lecture tour in South America.

Einstein continues his attempts at formulating a unified theory of gravitation and electromagnetism, and explores ideas on the light quantum. He collaborates with experimentalists in trying to find an explanation for earth’s magnetic field, a phenomenon he thinks might not be explainable in terms of the classic theory of electromagnetism. In June 1924, S. N. Bose sends Einstein a paper with a new derivation of Planck’s radiation law. Immediately realizing its significance, Einstein translates it into German and arranges for its publication. Building on Bose’s new approach, Einstein develops a new quantum theory of the ideal gas, effectively introducing a new kind of statistics for indistinguishable material particles. He belatedly gives his Nobel Prize acceptance talk. In two book reviews he resists attempts by philosophers to reconcile Kantian philosophy with relativity theory.