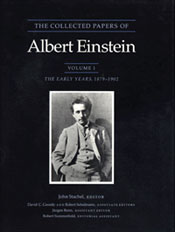 Presenting important new material on the young Einstein, over half the documents in this volume were previously unknown and discovered by the editors, including a significant group of over fifty letters that Einstein exchanged with Mileva Marić, his fellow student and future wife. These letters, together with other previously unpublished documents, provide an entirely new view of Einstein's youth.

The documents also foreshadow the emergence of his extraordinary creative power. In them is manifested his intense commitment to scientific work and his interest in certain themes that proved to be central to his thinking during the next decade. We can follow, for example, the beginnings of his preoccupation with the electrodynamics of moving bodies that was to lead to the development of the special theory of relativity.