We are thrilled by the excitement generated by our Digital Einstein Papers. Here are selected links to some of the numerous articles written about the newly launched site:

Thousands of Einstein Documents Are Now a Click Away by Dennis Overbye in the New York Times.

What Could Be Lost as Einstein's Papers Go Online by Walter Isaacson in The Wall Street Journal.

Einsteins Netzwerke in the Frankfurter Allgemeine Sonntagszeitung by Jürgen Renn is in the following file. [PDF FAS article] 12-10-14

THE EINSTEIN PAPERS PROJECT is pleased to co-sponsor the historical section of the upcoming international conference Space-Time Theories: Historical and Philosophical Contexts, to be held in Jerusalem, 5-8 January 2015.

THE DIGITAL EINSTEIN PAPERS launched on December 5th. To learn about the site's functionality watch this video:

For full details about the launch, click on the News Archive link below. To go directly to the site follow this link: http://einsteinpapers.press.princeton.edu. 12-10-14

Launching today, THE DIGITAL EINSTEIN PAPERS is a publicly available website of the collected and translated papers of Albert Einstein that allows readers to explore the writings of the world’s most famous scientist as never before.

Princeton, NJ – December 5, 2014 – Princeton University Press, in partnership with Tizra, Hebrew University of Jerusalem, and California Institute of Technology, announces the launch of THE DIGITAL EINSTEIN PAPERS (http://einsteinpapers.press.princeton.edu). This unique, authoritative resource provides full public access to the translated and annotated writings of the most influential scientist of the twentieth century: Albert Einstein.

THE DIGITAL EINSTEIN PAPERS website presents the complete contents of The Collected Papers of Albert Einstein, and, upon its launch, the website—http://einsteinpapers.press.princeton.edu—will contain 5,000 documents covering the first forty-four years of Einstein’s life, up to and including the award of the Nobel Prize in Physics and his long voyage to the Far East. Additional material will be available on the website approximately eighteen months after the print publication of new volumes of The Collected Papers. Eventually, the website will provide access to all of Einstein’s writings and correspondence, accompanied by scholarly annotation and apparatus.

What sorts of gems will users discover in THE DIGITAL EINSTEIN PAPERS? According to Diana L. Kormos-Buchwald, director of the Einstein Papers Project, “This material has been carefully researched and annotated over the last twenty-five years and contains all of Einstein’s scientific and popular writings, drafts, lecture notes, and diaries, and his professional and personal correspondence up to his forty-fourth birthday—so users will discover major scientific articles on the general theory of relativity, gravitation, and quantum theory alongside his love letters to his first wife, correspondence with his children, and his intense exchanges with other notable scientists, philosophers, mathematicians, and political personalities of the early twentieth century.”

THE DIGITAL EINSTEIN PAPERS is an unprecedented scholarly collaboration that highlights what is possible when technology, important content, and a commitment to global scholarly communication are brought together. We hope you will join us in celebrating this achievement and invite you to explore Einstein’s writings with the links below.

A Sampling of Documents Found in THE DIGITAL EINSTEIN PAPERS
Website: http://einsteinpapers.press.princeton.edu
“My Projects for the Future” — In this high school French essay, a seventeen-year-old Einstein describes his future plans, writing that “young people especially like to contemplate bold projects.”

Letter to Mileva Marić — The first volume of The Collected Papers of Albert Einstein revealed that the young Einstein had fathered an illegitimate daughter. In this letter to his sweetheart and future wife, Einstein, age twenty-two, expresses his happiness at the birth of his daughter Lieserl, and asks about her health and feeding.

Einstein’s first job offer — Einstein graduated from university in 1900, but had great difficulty finding academic employment. He received this notice of his appointment as a technical clerk at the Swiss Patent Office in June 1902 and would later describe his time there as happy and productive.

“On the Electrodynamics of Moving Bodies” — Einstein’s 1905 paper on the special theory of relativity is a landmark in the development of modern physics.

“On a Heuristic Point of View Concerning the Production and Transformation of Light” — Einstein received the Nobel Prize in Physics for this paper on the hypothesis of energy quanta.

The telegram informing that Einstein he has won the Nobel Prize — Einstein was traveling in the Far East when he officially learned via telegram that he had been awarded the prize. However, he had long been expecting the prize, as evidenced by a clause regarding its disposition in a preliminary divorce agreement from Mileva in 1918.

“The Field Equations of Gravitation” — Einstein spent a decade developing the general theory of relativity and published this article in late 1915.

To his mother Pauline Einstein — Einstein writes to his ailing mother to share the happy news that his prediction of gravitational light bending was confirmed by a British eclipse expedition in 1919.

To Heinrich Zangger, on the mercurial nature of fame — Having been propelled to world fame, Einstein writes to his friend about the difficulties of being “worshipped today, scorned or even crucified tomorrow.”

To Max Planck, on receiving credible death threats — Einstein writes that he cannot attend the Scientist’s Convention in Berlin because he is “supposedly among the group of persons being targeted by nationalist assassins.”

Work on THE DIGITAL EINSTEIN PAPERS was supported by the Harold W. McGraw, Jr. endowment, the California Institute of Technology, the National Science Foundation, the National Endowment for the Humanities, and the Arcadia Fund, U.K. 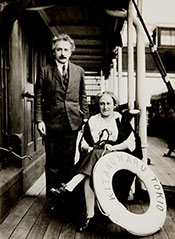 The Einstein cultural exhibit gives us a splendid glimpse into rare documents and images that tell not only the story of Einstein’s extraordinary voyage to publicize relativity in Japan in 1922, and to lay the cornerstone of the Hebrew University in Palestine in 1923, but also the dramatic trajectory of his entire life, illustrated by his colorful passports that bear testimony to the vagaries of his personal life. – Prof. Diana K. Buchwald, Einstein Papers Project, California Institute of Technology

The new online exhibit presents some of the highlights from Albert Einstein’s tour of Taisho-era Japan in November-December 1922 and to Palestine during the British Mandate in February 1923. Highlights of the exhibition include brief descriptions of Einstein’s extensive itinerary, numerous photos of the illustrious guest with local dignitaries and colleagues, a rendition of one of the most important lectures Einstein held in Japan and an excerpt from his travel diary on his impressions of Jerusalem.  - Dr. Ze'ev Rosenkranz, The Einstein Papers Project, California Institute of Technology, Curator "Einstein's Trip to the Far East and Palestine" [PDF Article] 09-09-14