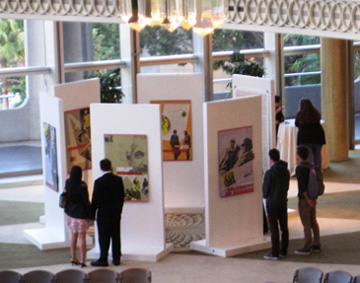 During dress rehearsal of Philip Glass’s opera Einstein On The Beach on 9 October 2013, the Einstein Papers Project at Caltech began presenting three installations inside the Dorothy Chandler Pavilion. The exhibitions include twelve large portraits by noted photographer H. Landshoff, intimate yet iconic images of Einstein during the years 1946-1950, taken at his last abode at 12 Mercer Street in Princeton, NJ. The photographs are one of only six printings in existence. They are usually housed in Caltech’s Board Room.

A second installation presents nine large panels that incorporate collages of original documents relating to Einstein’s three terms as a Visiting Scientists at Caltech 1930-1933, including newspaper clippings, photographs with distinguished scientists, visits to Mt. Wilson Observatory, to Palm Springs, and to the movies – with Charlie Chaplin.

A third installation documents Einstein’s love of music in a selection of archival documents, images, and texts on music and musicians.

In September, our Senior Editor Prof. A. J. KOX gave his farewell lecture and was honored with an academic procession, congratulatory speeches, and a Festschrift upon his retirement from the University of Amsterdam, where he is now Pieter Zeeman Professor of History of Physics, Emeritus in its Institute of Physics.

Shortly thereafter, our collaborator Dr. Jeroen van Dongen was appointed Professor of History of Science as Dr. Kox's successor. Many congratulations to both! 11-27-13 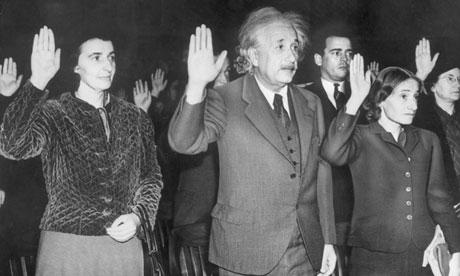 Our latest Volume was reviewed in The Guardian by Peter Forbes, who writes: "The joy of the Collected Papers, which has now reached the 13th volume and the year 1922, is that it reveals these lesser known facets of this extraordinary man."

"Japan and gyroscopes, refrigerators and impressionistic travel writing – these are not topics one would associate with Albert Einstein. Nor does the following sound like the master of time and space: "The prospect of a downright normal, natural life in tranquillity, connected with the welcome practical employment in the factory, enchants me. Add to that the wonderful countryside, sailing – enviable." This was a response to the offer by Einstein's friend, the inventor and businessman Hermann Anschütz-Kaempfe, of work and a home in Kiel, away from pressures that plagued him in Berlin after the first world war." 06-21-13

Our editor Ze'ev Rosenkranz recently reviewed Steven Gimbel's book Einstein’s Jewish Science: Physics at the Intersection of Politics and Religion in HOPOS: The Journal of the International Society for the History of Philosophy of Science. [PDF of article].

In May, Diana Buchwald and A. J. Kox presented lectures on Einstein and Ehrenfest at the Ehrenfest Symposium at the Museum Boerhaave in the Netherlands. The symposium concluded with an official handing over, to the museum, of a collection of original Ehrenfest material from the legacy of Ehrenfest’s biographer Martin J. Klein, former General Editor of the Einstein Papers Project. Museum Boerhaave already owns the Ehrenfest Scientific Archive.

Daniel J. Kennefick has published the results of research on supemassive black holes and quasars.

Tilman Sauer edited, with colleague Adrian Wüthrich of the University of Bern, New Vistas on Old Problems: Recent Approaches to the Foundations of Quantum Mechanics.  This collection of papers highlights some recent approaches to old problems in the philosophy of quantum mechanics and demonstrates that the discussion about the foundations of quantum mechanics is as lively and interesting as ever.

A. J. Kox recently published the paper, The discovery of the Stark effect and its early theoretical explanations, in the venerable Annalen der Physik. [PDF of article] Earlier this year, Kox's paper Hendrik Antoon Lorentz’s struggle with quantum theory appeared in Archive for History of Exact Sciences. [PDF of article] 05-23-13

Editor's Guest Blog
Senior Editor, Tilman Sauer, guest authored an entry on George Musser’s Critical Opalescence blog at Scientific American online. Musser explains in his introduction “The latest volume of the Collected Papers of Albert Einstein, which contains Einstein’s publications, draft papers, letters, and scribblings from January 1922 through March 1923, shows that his deep concerns with the quantum predated his well-known duels with Niels Bohr and played a major role in shaping the emerging theory.” Sauer describes Einstein’s untiring application to theoretical and experimental explorations in the early years of quantum theory including his scientific dialogues with Paul Ehrenfest.

Further reading related to those very dialogues may be found in an Annalen der Physik article co-authored by Sauer and EPP Editor, Issachar Unna. The article, Einstein, Ehrenfest and the quantum measurement problem, demonstrates how a paper that Einstein and Ehrenfest themselves co-authored was a prescient description of “what would later be recognized as a central conceptual difficulty of quantum mechanics”. 03-20-13

Senior Editor A. J. Kox received an unexpected email after his interview in the September 29th NRC-Handelsblad (EPP news 10-05-2012). Out of the blue, a reader of the paper sent Kox two Albert Einstein documents. Both were, up-‘til-now, unknown; one item is a manuscript of the speech Albert Einstein gave at the Genootschap Gold Medal ceremony in December of 1923. The other is a letter to the organizers of the ceremony in which Einstein explains that his manuscript was written after giving the speech—that he did not realize the speech would be published but that he has done his best to faithfully remember and record it for them in the manuscript he was sending them.

Coincidentally our next publication, Volume 14 of the CPAE covers the time period when the speech was given. This serendipitous connection led to a timely and fruitful lead in our research at the EPP. We are continually searching for unknown Einstein or Einstein-related material. If you are the owner of an Einstein letter or manuscript, or other pertinent document, or if you know someone who is: please get in touch with us. 03-20-13